In 2013, UMVIM, SEJ implemented an internship program to develop the leadership skills of a young person within the United Methodist Church. We were so pleased to welcome Lindsey Brown of the Memphis Conference as our 2015 Summer Intern. Lindsey is a nursing major at Union University, and despite her young age, has already traveled to Nicaragua 8 separate times on short-term trips. Read on to learn more about her summer as the UMVIM, SEJ Intern!

Domestic Placement
Lindsey began her summer at Alabama Rural Ministry (ARM), a project on the UMVIM Mission Opportunity List that works to end substandard housing and empower the young children in and around Tuskegee, Alabama. A quick look through Lindsey’s photo albums will show you how much she loves ministering to kids, and this really shined during her time at ARM. 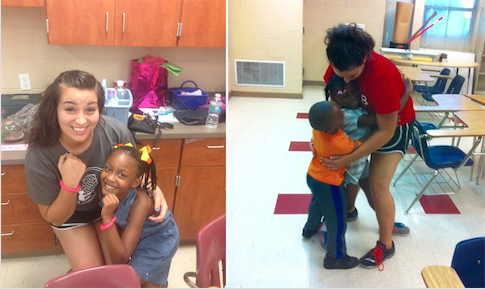 She reminisced about a young boy she met during ARM’s Sonshine Day Camp, who spent the first week of camp being polite, obedient, and helpful to the teachers, but behaved exactly the opposite the following week. As it turned out, this little boy’s parents were separated, and he had spent the first week with one parent and the second week with the other, which dramatically influenced his behavior. “This really got to me,” she said. “It made me realize the magnitude of how these kids’ home environment play into their behavior. However, we were able to look in his eyes and tell him that we love him, the Lord loves him, and that we both forgive him. Despite negative influences at home, through Sonshine Day Camp he was influenced by people who love him, and was exposed to God’s Word as well! I am thankful for my time here and the relationships that formed.”

International Placement
Lindsey’s international placement had her visiting Costa Rica for the first time, though she is no stranger to Central America. “I was extremely surprised by the differences between Nicaragua and Costa Rica, which I naively assumed would be more similar than they are. This realization is yet another reason I am so thankful for this internship.”

UMVIM, SEJ Executive Director Paulette West connected Lindsey with Rice and Beans, a ministry that engages in evangelism, feeding programs, and construction efforts. She spent much of her time leading Bible Schools, where once again, God was able to use Lindsey and her gift of connecting with children. She even had the opportunity to translate in a community where there are many Nicaraguan refugees. “It is so cool to see the Lord use my past experiences and passions in these moments,” Lindsey said.

Lindsey also recalls the rich spiritual and cultural experience she had during her first week. “There were people from Costa Rica, Mexico, El Salvador, Guatemala, Honduras, and the United States all in one place with the same mission to serve the people of Costa Rica in the Lord’s name. Hearing over a hundred of us sing out to the Lord in two different languages simultaneously was a beautiful thing. Yes, it was as amazing as it sounds! I have so many brothers and sisters all over the world, and have made amazing connections for future mission opportunities!”

Young People in Mission
Our summer interns are an integral part of our annual Young People in Mission event. Lindsey helped us behind the scenes in so many ways, from engaging with the speakers and workshop leaders, to assisting the Design Team in executing their vision. Lindsey also led a family group comprised of high school graduates who were preparing to enter college, and we invited her to lead a workshop based on her experiences at Alabama Rural Ministry. “It was humbling to trust in the Lord to give me guidance during that time, as public speaking is not something I typically enjoy!”

We are so very grateful to Lindsey and the passion she brought to our team this summer. We wish her the best as she finishes school, and our prayers follow her as the Lord guides her on her career path. If you or someone you know might be interested in the UMVIM, SEJ Summer Internship Program, click here to learn more about our previous interns, or contact Paulette West at paulette_west@umvim.org for more information.